Last month I came clean about how I dropped the ball with the Wu's Feet Links Hall of Fame (WFLHoF) after the 2015 class had been selected and announced. Well, I've been getting things done since then and am close to finalizing the new Wu's Feet Links Hall of Fame Blog. While not yet finished, I have published most of the members' pages for people to check out, enjoy, and critique. Those inductees include the following:


If you go through those inductee's pages you will be able to see a handful of things. I didn't want these pages just to have the person's name and hall of fame class. Even on Wu's older page he listed a couple of other items including links to their site and a couple of photos. This is what I have decided to go with on each page:

Name & Hall of Fame Class
This one is basic and doesn't really need to be mentioned, but each inductee's page is topped off with a large image and the person's name and year inducted. You'll also be able to see each class by year on the right side in the blog's archive. Luckily for me, Wu listed when he inducted his past members and I was able to backdate these entries to reflect that.

Basic Bio & Info.
With one exception so far (Wu), here is where you can find some basic information about the foot model you're browsing. Right now I have decided to include things such as shoe size, favorite types of shoes, whether her feet are ticklish, favorite foot fetish activities, and other fetish activities they're known for. To gather this information I used things such as past interviews, the model's sites, feature sets, and just common knowledge I have of these women.

Where things will be lacking, as it is with Wu's, is if a male producer or photographer is inducted. I guess it can be adapted to fit and other information can be placed. I will tackle that obstacle when it arrives. Sadly, however, the only thing I could really put for Wu is that he founded Wu's Feet Links. If you have any suggestions of other information that can be placed here on his, I'm all for it.

Online
Here you can find links to these models/producers sites, clip stores, social media accounts, and email addresses. In the case of some of the older inductees, I listed their site name, but put a "(defunct)" after it. I saw no point in linking to URL's that are no longer active, but I thought their former site names deserved to be mentioned.

Sample Gallery
I knew all along I wanted to include some sample photos on each page. Again, Wu is a little left out here since he didn't star in any work, nor did he take photos himself. Since he just ran one amazing site, I didn't know what to do here for him. With the models, however, I obviously just found photos of them online and made a gallery for each. But not for everyone... yet!

I say "yet" because I am at a loss for finding a handful of good photos for some of these models. This is the biggest reason why a few inductees pages are not yet online. If anyone has some older photo archives of the following people, could you please share them with me?
I do have some of both Bellecita and Genie, but they're from galleries contributed to Soles of Silk and I wanted to feature images from numerous sets, if possible. I can pluck out a couple from my site, however.

If you have any larger, high resolution images, of any of those listed above, please get in touch with me. I'd like to get some variety on these ladies pages. And I do realize that the majority of these inductees weren't posting in the modern era of HD and larger file sizes, if you will. I'm just trying to avoid images so small they're not really worth posting. So whatever you have, please let me know. 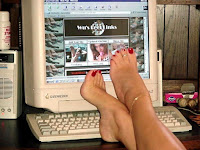 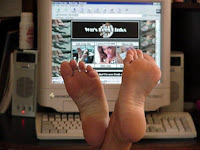 I also made sure to download the old Hall of Fame photos Wu had on his original page. I haven't included them, but am thinking that maybe I should? Perhaps within the gallery section, or in it's own little section. What do you think? It is only two images for each inductee, like the ones of Lil Redhead above.

Words From Peers & Fans
This section has some praise for each inductee from people in the online foot fetish community. It includes other webmasters, producers, and Wu's Feet Links Forum members. I put out a request for people to assist me with this and a number of people came through. It's not too late, if you'd like to toss out a few words for any of the inductees. I'll take them for another month or so.

So that's where I currently sit. I know this blog came a few days late again, but I wanted to touch base with everyone and give a progress report. As I said above, I'm looking for ideas, contributions, and especially photos. So get in touch with me if any of this is something you can assist with.
Posted by Wu's Feetlinks at 6:03 PM No comments: